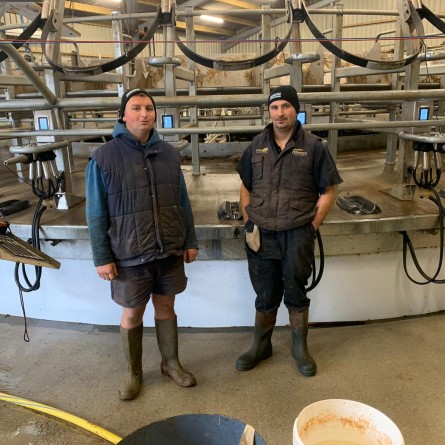 The Darke family has been farming in the UK for four generations and in 2020 embarked on a new project to increase the efficiency and productivity of their dairy operation.

Matt Darke runs the farm, about 1000 acres or 404 hectares, with his brother Sam, their father Richard and grandfather, Edward. “Not long ago we had some changes we wanted to make in our business plan for our farm,” Matt said. “We needed to increase our cash flow quite markedly and our dairy was the best way we saw we could achieve that goal.”

The family runs 250 cows, mainly Holstein and Holstein-cross-Norwegian Reds, supplying to Supato. They decided to increase the herd up to 400 cows, to generate more product and income.

“We had four robots put in only about six years ago but with the change in our business plan, to almost double our cows, the robots weren’t seen as an option to match that increase.”

The family started to look around for other options and the brothers fell back on some of the experience they had in New Zealand. Like many young farmers in the UK, Matt and Sam had spent some time working on dairy farms in the Waikato region in New Zealand, Matt in 2012 and Sam, 2015.

Sam had worked in a rotary and Matt in a swingover parlour and they had become aware of the Waikato Milking Systems brand during their time in the country. More recently they had learnt more about the company’s rotary milking solutions through Simon Hoare, a Waikato Milking Systems sales manager based in the UK. The family had worked with Simon previously. “What we were looking for was a one-man milking operation so we don’t have to rely on more than one person in the parlour,” Matt said. “We don’t have a lot of staff and so we were quite focussed on that aspect.”

The family installed a 44-bail Orbit Concrete Rotary parlour with a range of milking automation and dairy management options to reduce labour and increase efficiency. It included ECR Plus, automatic cup removers, the SmartSPRAY automatic teat spray system and SmartWASH, which controls an automatic wash system, reducing time and labour. The Orbit is also fitted with Yield Indicators which measure milk volume and can show milking trends for each cow. Complementing the Yield Indicators, are the Orbit’s Bail Displays, which show real-time milking information. The Navigate Dairy Management System on the Orbit manages the automatic Sort Gate, again eliminating time it would take to manually sort the animals as they exit the parlour. “I think the ACRs, the automatic cup removers and the automatic teat spray are two of the biggest things for us that have really helped us achieve that goal of it being a one-man operation,” Matt said.

The parlour and collecting yard was a new build completed in a month. The stallwork and technology onboard the rotary took just a week to install. “We built it in a new location, nowhere near the existing parlour. We wanted it where we felt it was handy for all of the housing we have for the cows.” Training the animals went better than expected. “We didn’t do anything like feed-only on the rotary to start with, one afternoon we just thought, let’s go for it,” Matt said. “There was some encouragement needed for the cows to use the rotary the first time and most of the second time. “But by the third time milking in the new rotary, most of the cows were coming on by themselves which surprised us, because we thought it was going to be a hard slog for the first couple of weeks.”

Matt said the family was excited to watch the new parlour and rotary be constructed during the Northern Hemisphere summer. It was commissioned in August 2020. “We were pretty relieved when it was all done and it was exciting to see if working for the first time. When you put that sort of investment into it, it’s quite a big thing, and now it’s good to be up and running.”

The farm milks three days a day to maximise output. “If we are milking all 230 cows, we are finishing up in an hour and 15 minutes, that’s including wash down as well. In the evening I milk 140 of the high-yield cows and I’m doing that in 45 minutes, and we’re happy with that.”

News of the new build has got around and the Darke family had five or six people come to see the Orbit rotary milking the animals not long after it was commissioned. Matt said his advice for other farmers looking to expand their herds was to fully consider the options a rotary milking parlour could offer.

Waikato Milking Systems had a range of options and had the ability to manufacture rotary systems to suit the particular needs of dairy farms. “We looked at putting in a 50-bail rotary because it’s one of those things, you do it once and be done with it,” Matt said. “But we had to consider our budget and funding, and other business requirements so we settled on a 44-bail rotary. “People think to have a rotary you need to be milking 500 or 600 cows but you don’t have to. “Don’t be scared to look at a rotary, I think compared to Herringbones, they are far more efficient.” 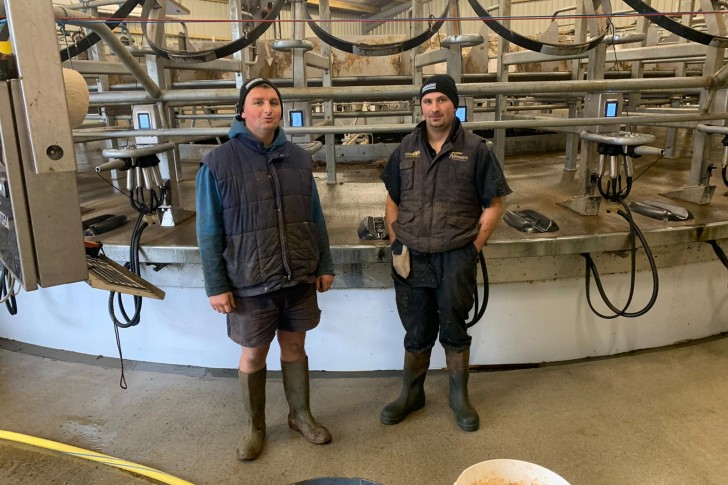