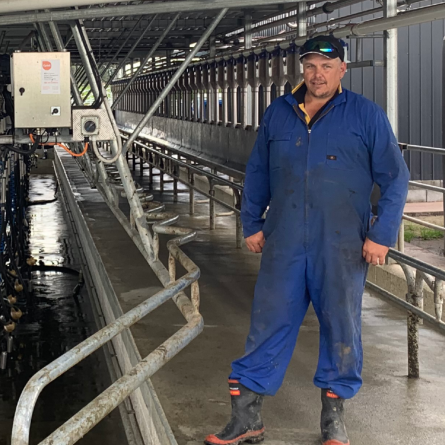 More efficient milking, and less time in the shed

Having grown up on a dairy farm in the Waikato and “not wanting to become a dairy farmer,” Michael Tillemans became a qualified Trade Mechanic before taking up farming again in 1997 - after realising that “farming didn’t look too bad after all.”

In 2018 Michael purchased a 134ha dairy farm three kilometres north of Tokoroa, and after several years decided he needed to upgrade the existing 26-aside milking system. With the old system “the time spent in the shed, and cow flow was a shocker,” says Michael - and he wanted his staff to be able to spend less time in the cow shed so they “could be more productive elsewhere on the farm.”


Michael also wanted it to be easier to hire replacement staff when required. “I just wanted to be able to build a 40-aside milking shed with a swing-over, where one person would be able to milk 400 cows by themselves.”

The simplicity of the Supa4’s design ensures ease-of-use for operators, especially when changing modes - and it also includes a state-of-the-art electronic pulsation system for fast and uninterrupted milking. The system features a premium quality 100mm milk pipeline that provides a stable milking vacuum at all times, and totally eliminates milk line flooding.

Since installing the new Supa4 inline system, the labour required at milking time on Michael’s farm has been reduced. “Milking is more efficient and we have better cow flow. The Swing Arms have meant better cup alignment, and there’s plenty of room to walk around the pit,” says Michael.

Michael also says that because his old milking system didn’t have Automatic Cup Removers, “we have better udder health now due to the Swing Arm ACRs that were installed” on his new milking system.

The Supa4 In-line system also features the Hurricane Slug Wash System that ensures the 100mm milk line is maintained at the highest hygiene levels to take full advantage of the totally enclosed wash system. “The slug wash puts a big slug down the milking line to make sure it’s cleaned out properly. And with the AutoWASH function you just push a button and walk away,” says Michael. The system also features Swing Down Cluster Washers that can be lowered to reduce the effort required for cup positioning and cleaning.
Qubik Putaruru installed and commissioned Michael’s new Supa4 inline milking system in May 2022 with Michael saying “While they had a fair bit on at the time, they did 12 hour days to get it done and dusted on time.”

Michael would “definitely recommend” the Supa4 system to farmers wanting to increase their milking efficiency and reduce their labour. “I just like Waikato Milking Systems professionalism, and they’re easy to work with.”